“You may have to fight a battle more than once to win it.” — Margaret Thatcher

In 1968 during the Mexico City Summer Olympics, a marathon runner named John Stephen Akhwari found himself thousands miles away from his home country of Tanzania, in East Africa. While running the marathon at the high altitude of Mexico City he got hit by other athletes jockeying for position and fell to the ground, badly wounding his knee and causing a dislocation. After receiving medical attention, instead of pulling out of the competition after such a bad injury, he stood up and continued the race.

When a small crowd saw Akhwari crossing the line, they cheered him in disbelief, and the few remaining reporters rushed onto the track to ask him why he continued to run the race with his injuries. His response went down in history: “My country did not send me 5,000 miles to start the race. They sent me 5,000 miles to finish the race.”

This story has since inspired many athletes and non-athletes alike. You might be thinking at this point, “That’s great, it’s an inspiring story, but what does it have to do with me?” The main message for you and me is this: “Keep going!” This has been a long series spun over a long period of time and at times it may feel daunting to go along with it, but we’re approaching an important milestone in the series, so we need to keep going.

We have a couple of goals for today:

1. What is a memory system?

To put it simply, it is a system for storing and accessing data in memory. At the hardware level, it is the physical memory (RAM) where values are stored at particular physical addresses. At the interpreter level, because our interpreter stores values according to their variable names and not physical addresses, we represent memory with a dictionary that maps names to values. Here is a simple demonstration where we store the value of 7 by the variable name y, and then immediately access the value associated with the name y:

We’ve been using this dictionary approach to represent global memory for a while now. We’ve been storing and accessing variables at the PROGRAM level (the global level) using the GLOBAL_MEMORY dictionary. Here are the parts of the interpreter concerned with the “memory” creation, handling assignments of values to variables in memory and accessing values by their names:

Now that we’ve described how we currently represent memory in our interpreter, let’s find out an answer to the next question.

2. Why do we need a new memory system for our interpreter?

It turns out that having just one dictionary to represent global memory is not enough to support procedure and function calls, including recursive calls.

To support nested calls, and a special case of nested calls, recursive calls, we need multiple dictionaries to store information about each procedure and function invocation. And we need those dictionaries organized in a particular way. That’s the reason we need a new memory system. Having this memory system in place is a stepping-stone for executing procedure calls, which we will implement in future articles.

At its core, the new memory system is a stack data structure that holds dictionary-like objects as its elements. This stack is called the “call stack” because it’s used to track what procedure/function call is being currently executed. The call stack is also known as the run-time stack, execution stack, program stack, or just “the stack”. The dictionary-like objects that the call stack holds are called activation records. You may know them by another name: “stack frames”, or just “frames”.

Let’s go into more detail about the call stack and activation records.

What is a stack? A stack is a data structure that is based on a “last-in-first-out” policy (LIFO), which means that the most recent item added to the stack is the first one that comes out. It’s like a collection of plates where you put (“push”) a plate on the top of the plate stack and, if you need to take a plate, you take one off the top of the plate stack (you “pop” the plate): 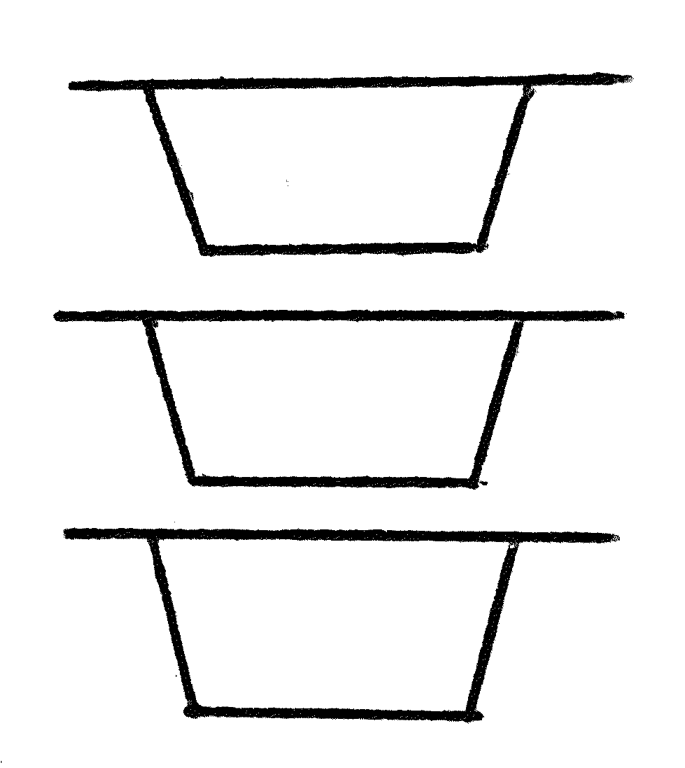 Our stack implementation will have the following methods:

- push (to push an item onto the stack)

And by our convention our stack will be growing upwards: 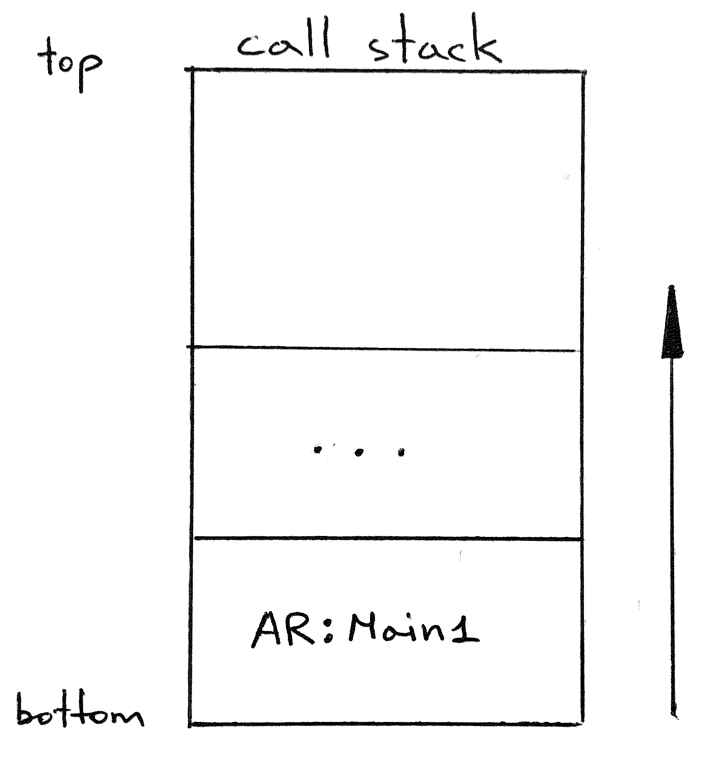 How would we implement a stack in code? A very basic implementation could look like this:

That’s pretty much how our call stack implementation will look as well. We’ll change some variable names to reflect the fact that the call stack will store activation records and add a __str__() method to print the contents of the stack:

Let’s take a look at how we will represent activation records in code:

There are a few things worth mentioning:

b. The members dictionary represents memory that will be used for keeping information about a particular invocation of a routine. We’ll cover this in more detail in the next article

c. The ActivationRecord class implements special __setitem__() and __getitem__() methods to give activation record objects a dictionary-like interface for storing key-value pairs and for accessing values by keys: ar[‘x’] = 7 and ar[‘x’]

d. The get() method is another way to get a value by key, but instead of raising an exception, the method will return None if the key doesn’t exist in the members dictionary yet.

e. The __str__() method returns a string representation of the contents of an activation record

In the picture below, you can see the description of the contents of the activation record from the interactive session above: 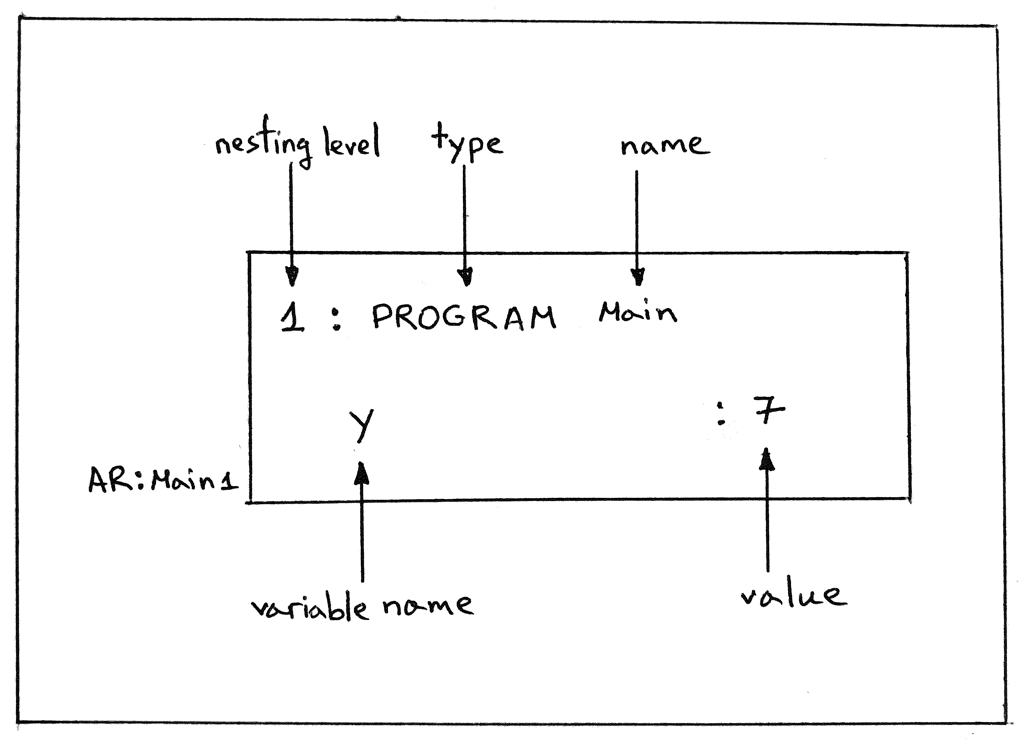 AR:Main1 denotes an activation record for the program named Main at nesting level 1.

4. Why would we want to replace the GLOBAL_MEMORY dictionary with the call stack?

The reason is to simplify our implementation and to have unified access to global variables defined at the PROGRAM level as well as to procedure and function parameters and their local variables.

In the next article we’ll see how it all fits together, but for now let’s get to the Interpreter class changes where we put the call stack and activation records described earlier to good use.

Here are all the interpreter changes we’re going to make today:

1. Replace the GLOBAL_MEMORY dictionary with the call stack

2. Update the visit_Program method to use the call stack to push and pop an activation record that will hold the values of global variables

3. Update the visit_Assign method to store a key-value pair in the activation record at the top of the call stack

4. Update the visit_Var method to access a value by its name from the activation record at the top of the call stack

5. Add a log method and update the visit_Program method to use it to print the contents of the call stack when interpreting a program

Let’s get started, shall we?

1. First things first, let’s replace the GLOBAL_MEMORY dictionary with our call stack implementation. All we need to do is change the Interpreter constructor from this:

Let’s unpack what’s going on in the updated method above:

3. Up next, let’s update the visit_Assign method to store a key-value pair in the activation record at the top of the call stack:

In the code above we use the peek() method to get the activation record at the top of the stack (the one that was pushed onto the stack by the visit_Program method) and then use the record to store the value var_value using var_name as a key.

4. Next, let’s update the visit_Var method to access a value by its name from the activation record at the top of the call stack:

Again as you can see, we use the peek() method to get the top (and only) activation record - the one that was pushed onto the stack by the visit_Program method to hold all the global variables and their values - and then get a value associated with the var_name key.

5. And the last change in the Interpreter class that we’re going to make is to add a log method and use the log method to print the contents of the call stack when the interpreter evaluates a program:

Download the following sample program from GitHub or save it to file part17.pas

Run the interpreter with the part17.pas file as its input file and the “—stack” command line option to see the contents of the call stack as the interpreter executes the source program:

Mission accomplished! We have implemented a new memory system that can support programs, procedure calls, and function calls. And we’ve replaced the interpreter’s current memory system, represented by the GLOBAL_MEMORY dictionary, with the new system based on the call stack and activation records.

That’s all for today. In the next article we’ll extend the interpreter to execute procedure calls using the call stack and activation records. This will be a huge milestone for us. So stay tuned and see you next time!

Resources used in preparation for this article (some links are affiliate links):