I remember when I was in university (a long time ago) and learning systems programming, I believed that the only “real” languages were Assembly and C. And Pascal was - how to put it nicely - a very high-level language used by application developers who didn’t want to know what was going on under the hood.

Little did I know back then that I would be writing almost everything in Python (and love every bit of it) to pay my bills and that I would also be writing an interpreter and compiler for Pascal for the reasons I stated in the very first article of the series.

These days, I consider myself a programming languages enthusiast, and I’m fascinated by all languages and their unique features. Having said that, I have to note that I enjoy using certain languages way more than others. I am biased and I’ll be the first one to admit that. :)

This is me before: 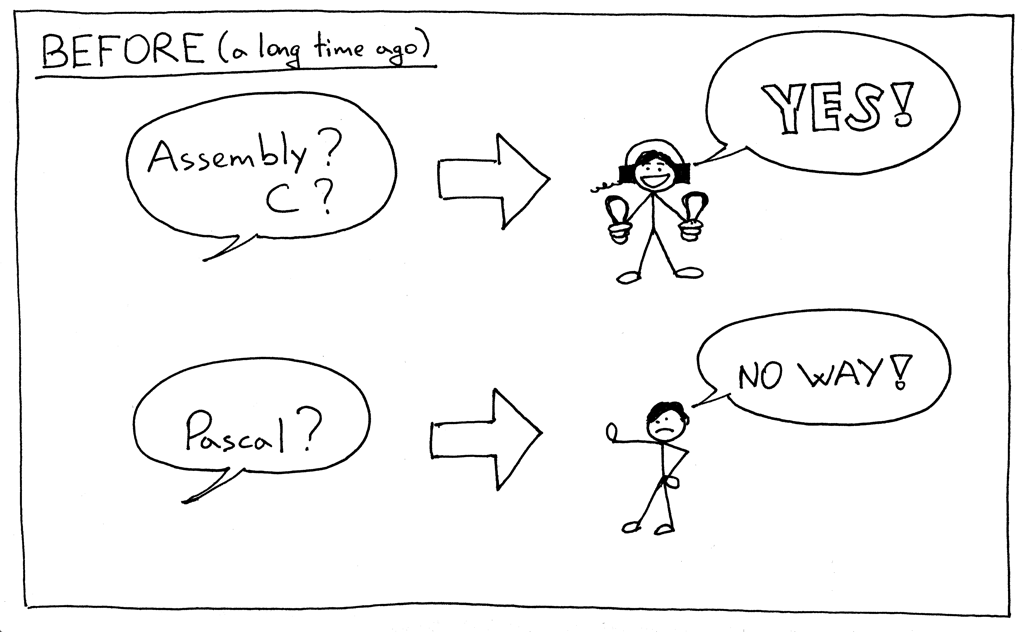 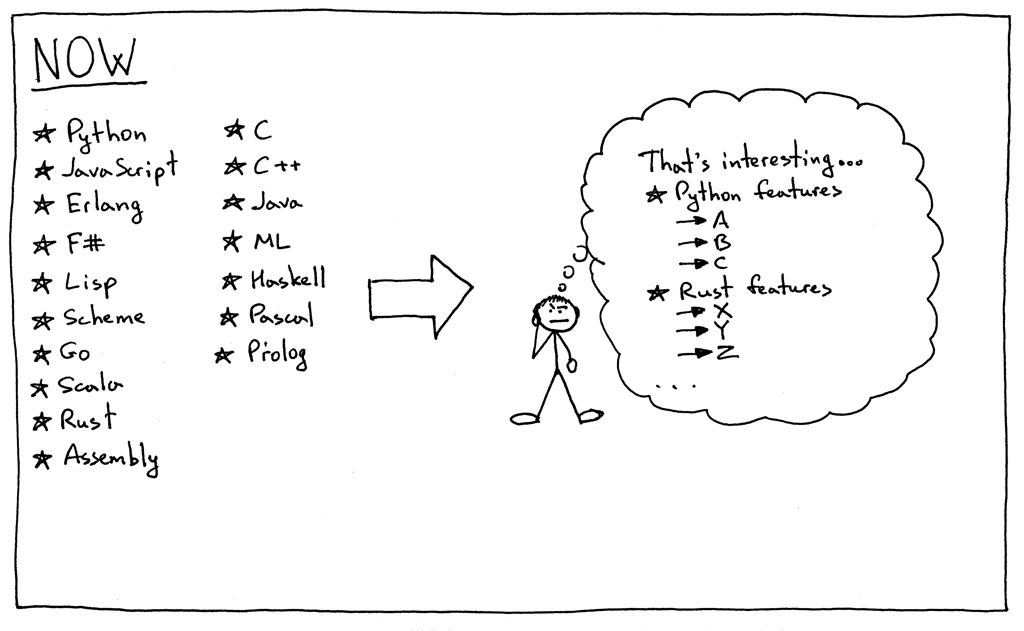 Okay, let’s get down to business. Here is what you’re going to learn today:

You could say that that’s quite a jump from the command line interpreter you wrote so far by following the previous articles in the series, but it’s a jump that I hope will bring excitement. It’s not “just” a calculator anymore, we’re getting serious here, Pascal serious. :)

Let’s dive in and look at syntax diagrams for new language constructs and their corresponding grammar rules.

On your marks: Ready. Set. Go! 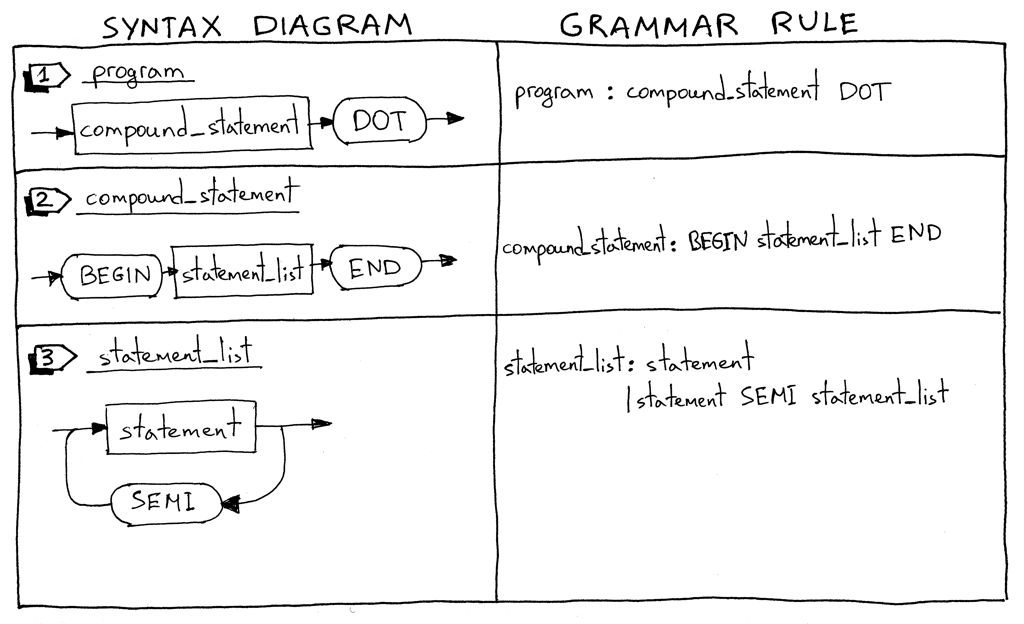 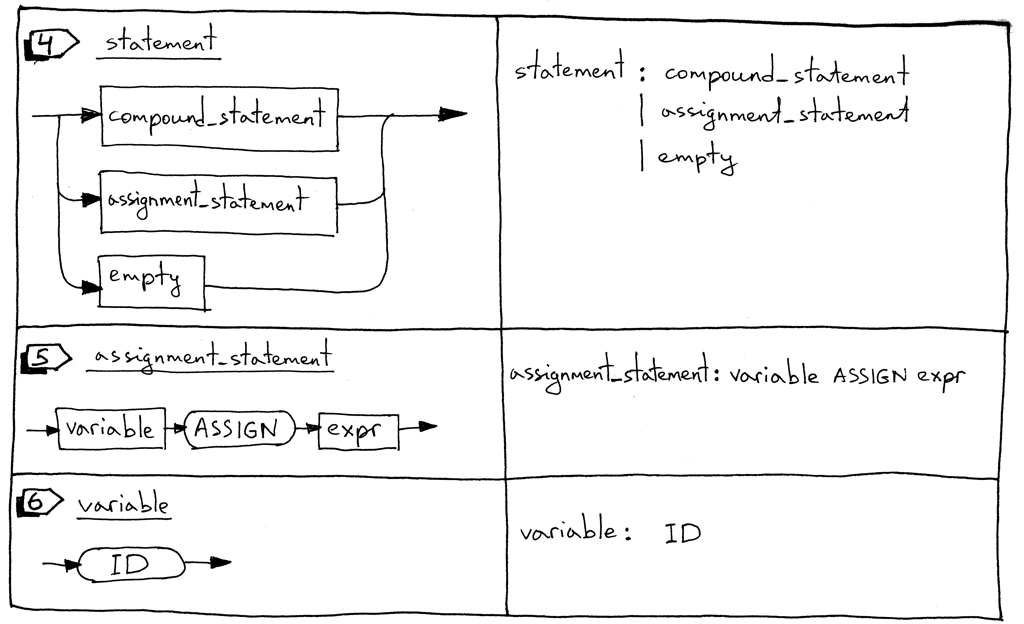 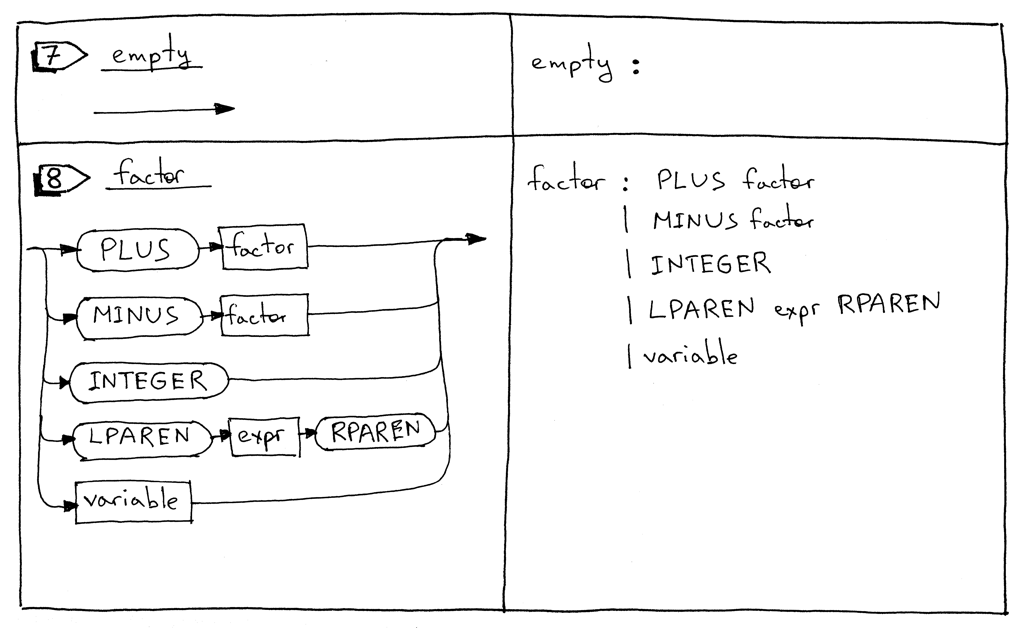 Now let’s take a look at our complete grammar:

You probably noticed that I didn’t use the star ‘*’ symbol in the compound_statement rule to represent zero or more repetitions, but instead explicitly specified the statement_list rule. This is another way to represent the ‘zero or more’ operation, and it will come in handy when we look at parser generators like PLY, later in the series. I also split the “(PLUS | MINUS) factor” sub-rule into two separate rules.

In order to support the updated grammar, we need to make a number of changes to our lexer, parser, and interpreter. Let’s go over those changes one by one.

Here is the summary of the changes in our lexer: 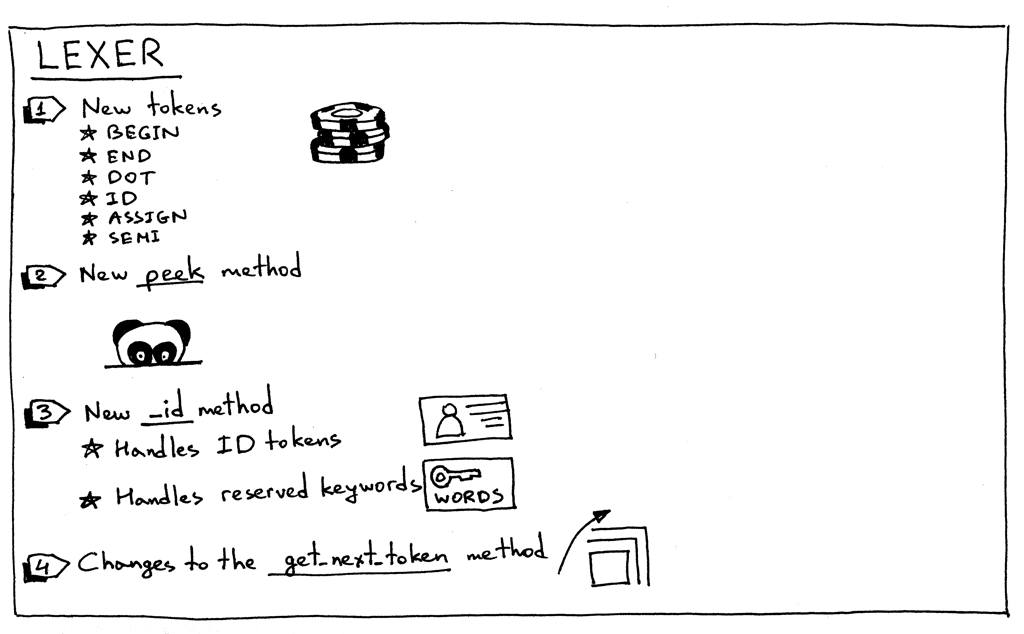 It’s time to see our shiny new lexer in all its glory and action. Download the source code from GitHub and launch your Python shell from the same directory where you saved the spi.py file:

Moving on to parser changes.

Here is the summary of changes in our parser: 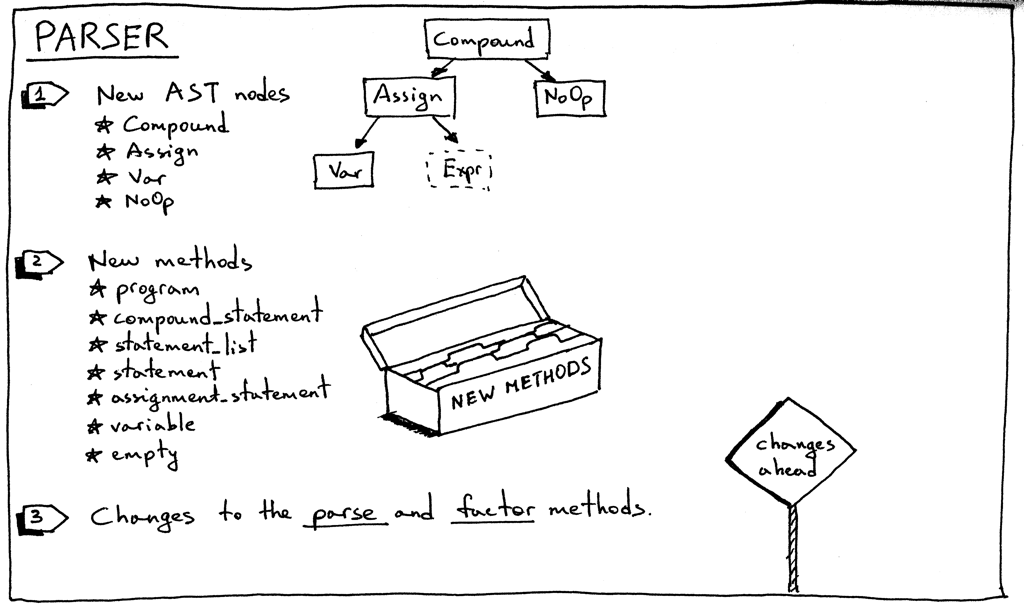 Here is our sample program again:

Let’s visualize it with genastdot.py (For brevity, when displaying a Var node, it just shows the node’s variable name and when displaying an Assign node it shows ‘:=’ instead of showing ‘Assign’ text): 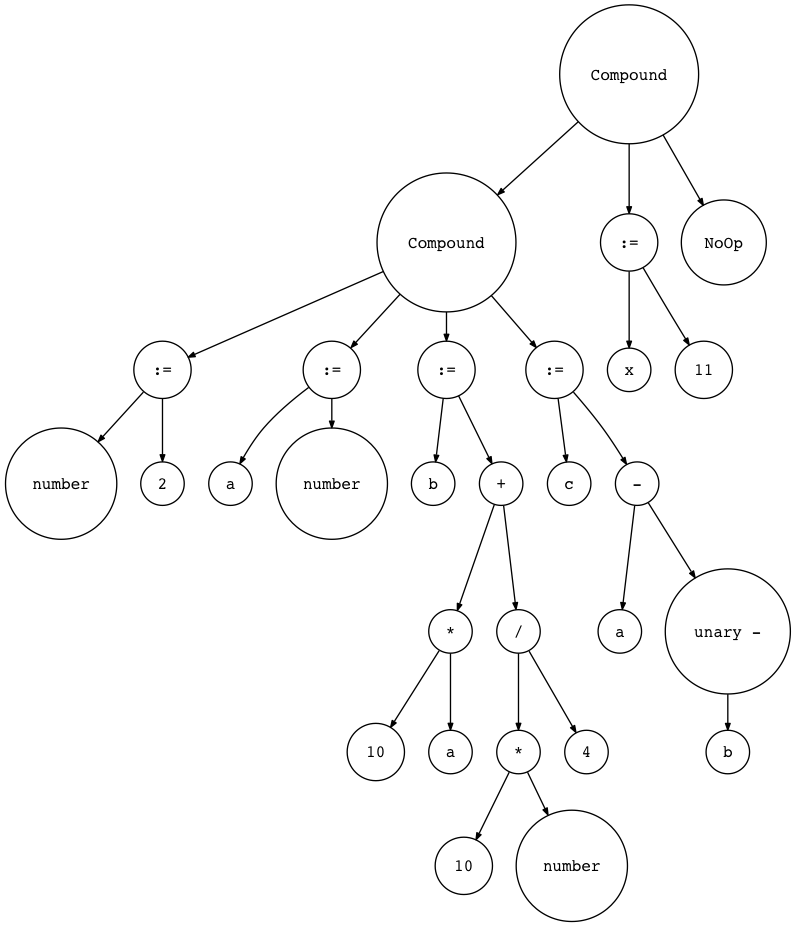 And finally, here are the required interpreter changes: 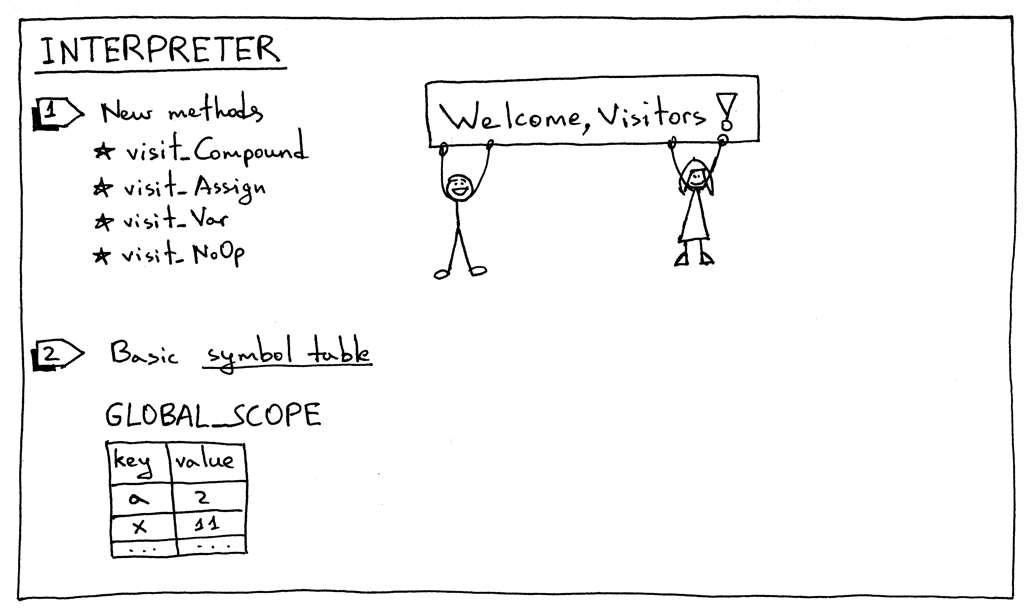 Compound and NoOp visitor methods are pretty straightforward. The visit_Compound method iterates over its children and visits each one in turn, and the visit_NoOp method does nothing.

The Assign and Var visitor methods deserve a closer examination.

When we assign a value to a variable, we need to store that value somewhere for when we need it later, and that’s exactly what the visit_Assign method does:

The method stores a key-value pair (a variable name and a value associated with the variable) in a symbol table GLOBAL_SCOPE. What is a symbol table? A symbol table is an abstract data type (ADT) for tracking various symbols in source code. The only symbol category we have right now is variables and we use the Python dictionary to implement the symbol table ADT. For now I’ll just say that the way the symbol table is used in this article is pretty “hacky”: it’s not a separate class with special methods but a simple Python dictionary and it also does double duty as a memory space. In future articles, I will be talking about symbol tables in much greater detail, and together we’ll also remove all the hacks.

Let’s take a look at an AST for the statement “a := 3;” and the symbol table before and after the visit_Assign method does its job: 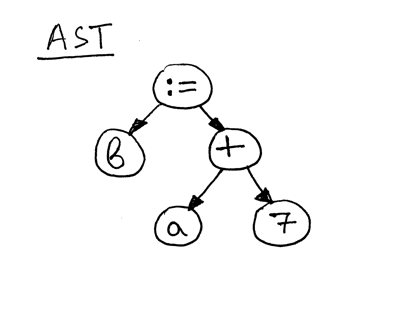 As you can see, the right-hand side of the assignment statement - “a + 7” - references the variable ‘a’, so before we can evaluate the expression “a + 7” we need to find out what the value of ‘a’ is and that’s the responsibility of the visit_Var method:

When the method visits a Var node as in the above AST picture, it first gets the variable’s name and then uses that name as a key into the GLOBAL_SCOPE dictionary to get the variable’s value. If it can find the value, it returns it, if not - it raises a NameError exception. Here are the contents of the symbol table before evaluating the assignment statement “b := a + 7;”:

These are all the changes that we need to do today to make our interpreter tick. At the end of the main program, we simply print the contents of the symbol table GLOBAL_SCOPE to standard output.

Let’s take our updated interpreter for a drive both from a Python interactive shell and from the command line. Make sure that you downloaded both the source code for the interpreter and the assignments.txt file before testing:

And from the command line, using a source file as input to our interpreter:

If you haven’t tried it yet, try it now and see for yourself that the interpreter is doing its job properly.

Let’s sum up what you had to do to extend the Pascal interpreter in this article:

In this part I had to introduce a number of “hacks” that we’ll remove as we move forward with the series: 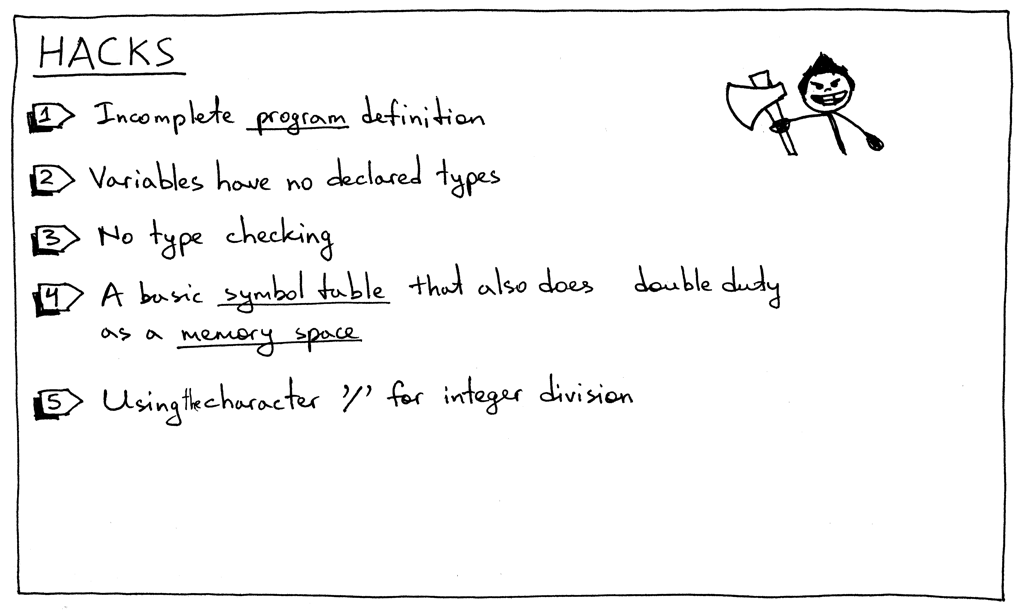 To keep you fit, here are new exercises for you: 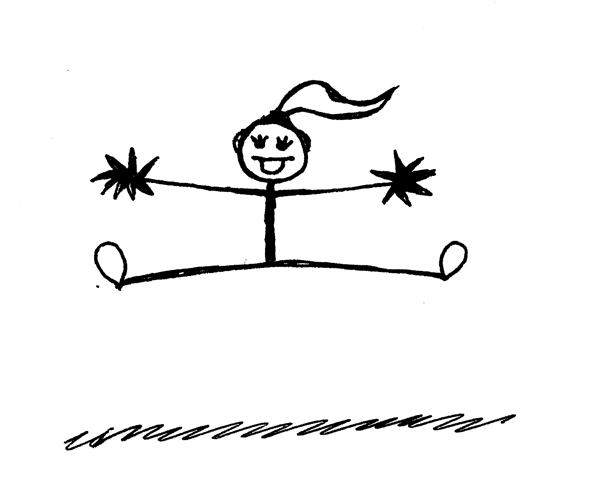 That’s all for today. Stay tuned and see you soon.

Here is a list of books I recommend that will help you in your study of interpreters and compilers: