“I do and I understand.”

In the previous article you learned how to parse (recognize) and interpret arithmetic expressions with any number of plus or minus operators in them, for example “7 - 3 + 2 - 1”. You also learned about syntax diagrams and how they can be used to specify the syntax of a programming language.

Today you’re going to learn how to parse and interpret arithmetic expressions with any number of multiplication and division operators in them, for example “7 * 4 / 2 * 3”. The division in this article will be an integer division, so if the expression is “9 / 4”, then the answer will be an integer: 2.

I will also talk quite a bit today about another widely used notation for specifying the syntax of a programming language. It’s called context-free grammars (grammars, for short) or BNF (Backus-Naur Form). For the purpose of this article I will not use pure BNF notation but more like a modified EBNF notation.

Here are a couple of reasons to use grammars:

Now, let’s talk about the mechanical aspects of grammars, shall we?

Here is a grammar that describes arithmetic expressions like “7 * 4 / 2 * 3” (it’s just one of the many expressions that can be generated by the grammar):

A grammar consists of a sequence of rules, also known as productions. There are two rules in our grammar: 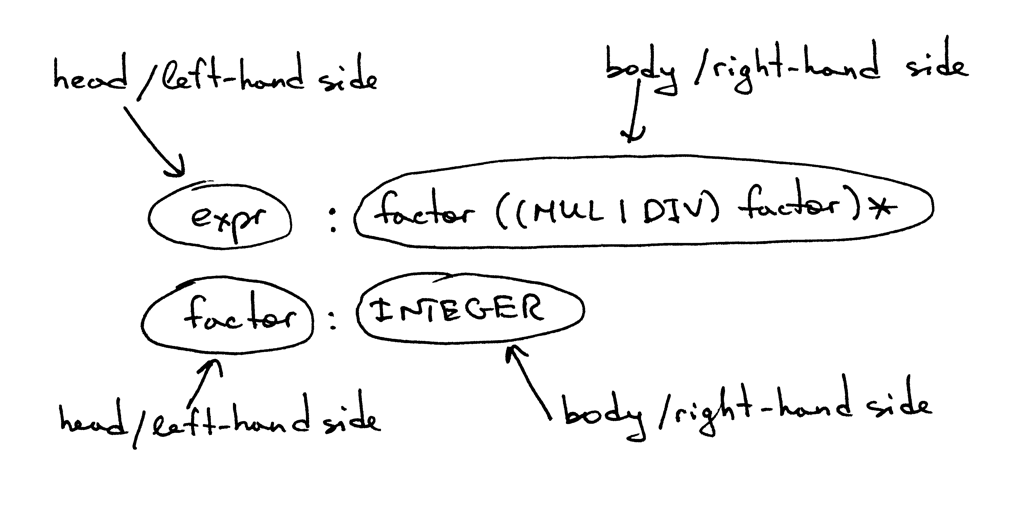 What is a factor? For the purpose of this article a factor is just an integer.

Let’s quickly go over the symbols used in the grammar and their meaning.

If you worked with regular expressions in the past, then the symbols |, (), and (…)* should be pretty familiar to you.

A grammar defines a language by explaining what sentences it can form. This is how you can derive an arithmetic expression using the grammar: first you begin with the start symbol expr and then repeatedly replace a non-terminal by the body of a rule for that non-terminal until you have generated a sentence consisting solely of terminals. Those sentences form a language defined by the grammar.

If the grammar cannot derive a certain arithmetic expression, then it doesn’t support that expression and the parser will generate a syntax error when it tries to recognize the expression.

I think a couple of examples are in order. This is how the grammar derives the expression 3: 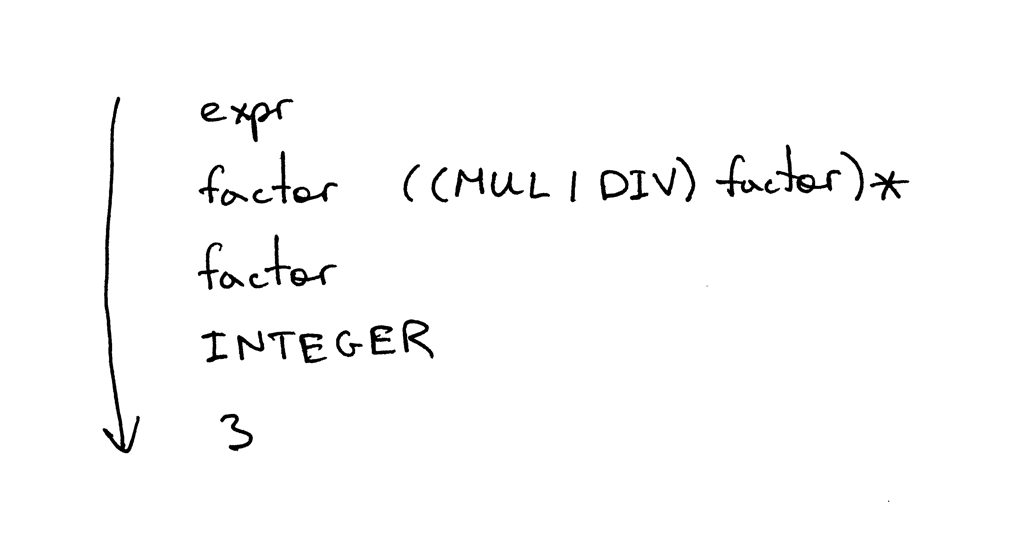 This is how the grammar derives the expression 3 * 7: 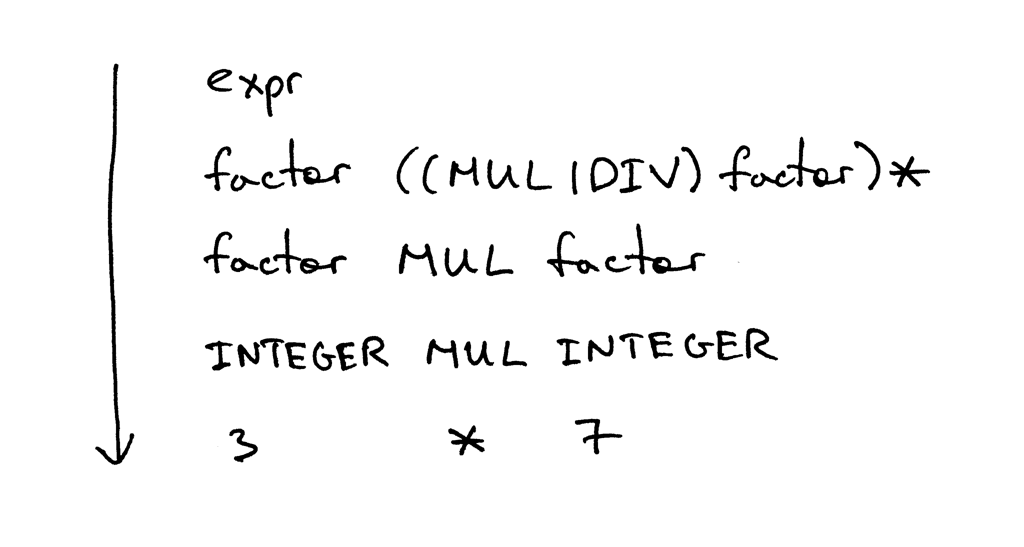 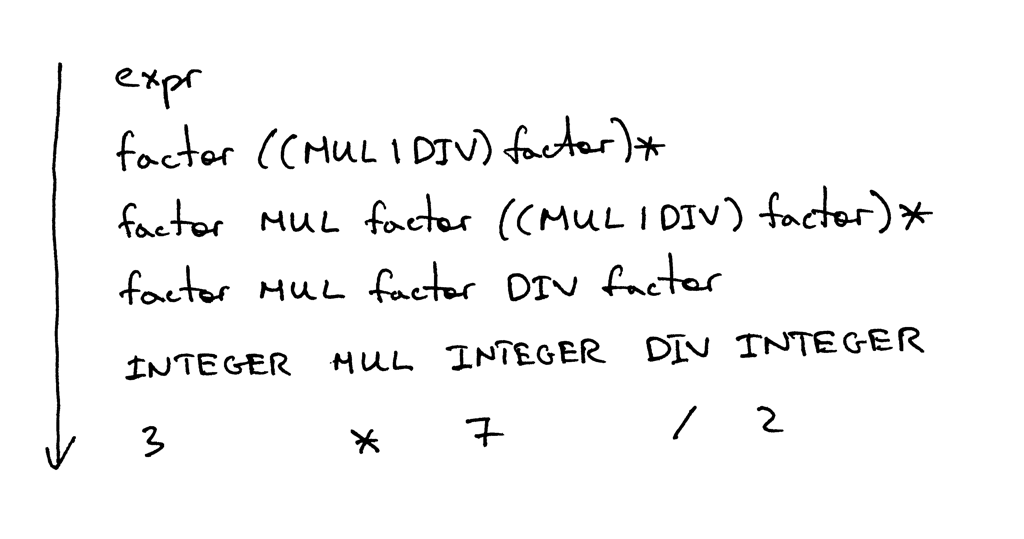 Whoa, quite a bit of theory right there!

I think when I first read about grammars, the related terminology, and all that jazz, I felt something like this: 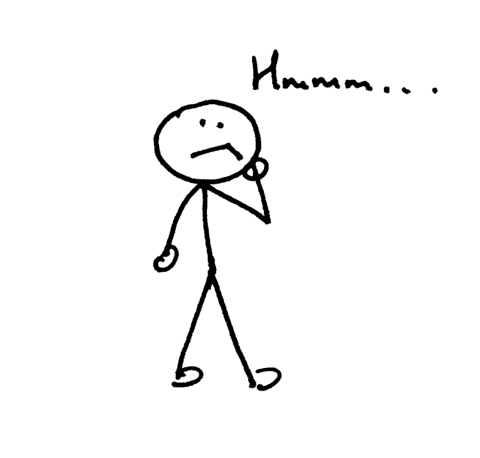 I can assure you that I definitely was not like this: 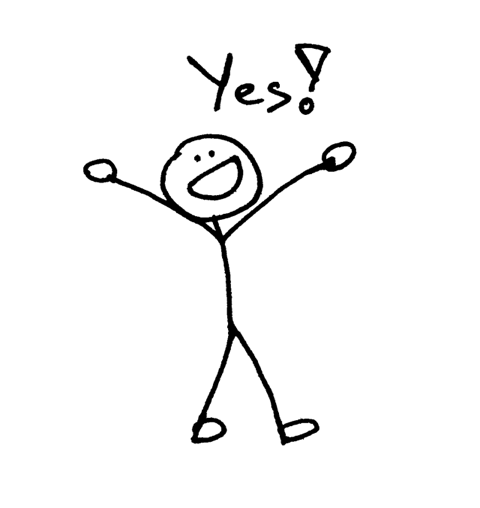 It took me some time to get comfortable with the notation, how it works, and its relationship with parsers and lexers, but I have to tell you that it pays to learn it in the long run because it’s so widely used in practice and compiler literature that you’re bound to run into it at some point. So, why not sooner rather than later? :)

Here are the guidelines that we will use to convert the grammar to source code. By following them, you can literally translate the grammar to a working parser: 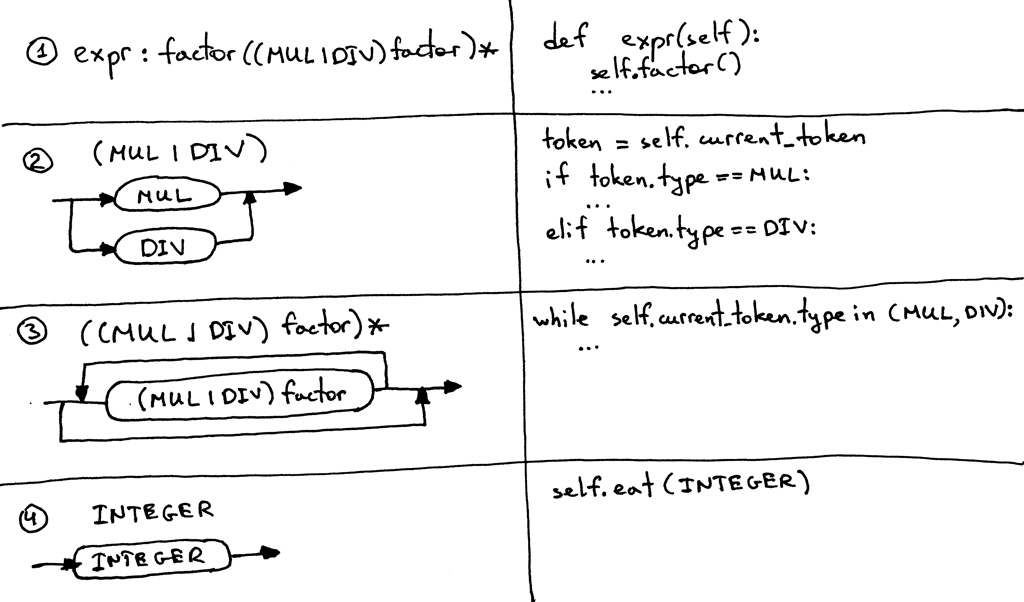 Let’s get moving and convert our grammar to code following the above guidelines.

There are two rules in our grammar: one expr rule and one factor rule. Let’s start with the factor rule (production). According to the guidelines, you need to create a method called factor (guideline 1) that has a single call to the eat method to consume the INTEGER token (guideline 4):

That was easy, wasn’t it?

The rule expr becomes the expr method (again according to the guideline 1). The body of the rule starts with a reference to factor that becomes a factor() method call. The optional grouping (…)* becomes a while loop and (MUL | DIV) alternatives become an if-elif-else statement. By combining those pieces together we get the following expr method:

Please spend some time and study how I mapped the grammar to the source code. Make sure you understand that part because it’ll come in handy later on.

For your convenience I put the above code into the parser.py file that contains a lexer and a parser without an interpreter. You can download the file directly from GitHub and play with it. It has an interactive prompt where you can enter expressions and see if they are valid: that is, if the parser built according to the grammar can recognize the expressions.

Here is a sample session that I ran on my computer:

It’s about time we dug into the source code of our new arithmetic expression interpreter. Below is the code of a calculator that can handle valid arithmetic expressions containing integers and any number of multiplication and division (integer division) operators. You can also see that I refactored the lexical analyzer into a separate class Lexer and updated the Interpreter class to take the Lexer instance as a parameter:

Save the above code into the calc4.py file or download it directly from GitHub. As usual, try it out and see for yourself that it works.

This is a sample session that I ran on my laptop:

I know you couldn’t wait for this part :) Here are new exercises for today: 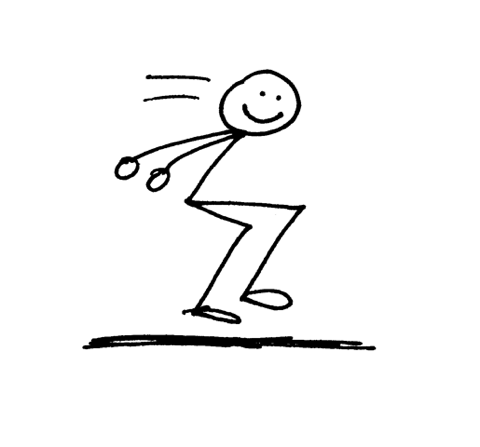 Keeping in mind the grammar from today’s article, answer the following questions, referring to the picture below as needed:

Hey, you read all the way to the end! This post contained quite a bit of theory, so I’m really proud of you that you finished it.

I’ll be back next time with a new article - stay tuned and don’t forget to do the exercises, they will do you good.

Here is a list of books I recommend that will help you in your study of interpreters and compilers: